Studies of mutagenicity of new pharmacological agents and excipients of dosage forms are conducted on preclinical stage, and include evaluating the ability of the drugs to induce different types of mutations in embryonic and somatic cells.

For this purpose, it is used a complex of methods being performed in different test objects. The work experience in testing drugs which was accumulated by different groups of researchers since the release of the first edition of the “Methodical recommendations in evaluating mutagenicity of new drugs” (1981), shows that on preclinical stage it is advisable to use the following set of tests for evaluating medicines on mutagenicity:

Regulation of recommended methods of studying mutagenicity and the algorithms of interpretation of experimental results are described in the appropriate sections, general issues on genotoxicology of medicines are set out earlier.

Studying mutagenic properties of pharmacological agents as well as an expert evaluation of the results should be performed by specialists having enough professional skills in using methods which constitute the test system. These methodical recommendations describe a complex system of verification of genetic activity of new medicines, but are not the guide for the development of methods. The last ones may be developed in the proper amount only as a result of the internship in laboratories of appropriate profile.

New original pharmacological agents created by chemical, biotechnological, genetically engineered and other methods, including those received from raw materials of natural origin and phytopreparations, as well as new fixed combinations of pharmacological agents which are planned for broad clinical use, should be tested on mutagenic activity.

In the case of gaining positive results in both tests it should be concluded about the presence of mutagenic activity, and the drug is not tested hereinafter.

In the case of gaining positive result only in a test on induction of the gene mutations an additional study on induction of DNA-damaging in different organs and tissues of mammals in vivo with inclusion in the analysis of embryonic cells is needed.

Provided the negative results are gained, the drug may be admitted to the 1st and 2nd phases of clinical trials.

Before the 3rd phase of clinical trials it is necessary to perform the study of drug’s ability to induce mutations in embryonic cells (accounting method of the dominant lethal mutations in mice).

In the case of gaining results in the experimental tests which do not allow concluding with certainty about mutagenic properties of tested pharmacological substance on the final stages of clinical trials (3rd phase), a study by the accounting methods of chromosomal aberrations and/or DNA-damaging in peripheral blood cells of treated patients is recommended.

Mutagenicity assessment of medicines is performed according to the Manual for conducting preclinical studies of drugs. Under the editorship of Mironov A.N., Bunatyan N.D. et al., M., publishing house “Grif and K”, 2012 and FDA Guidance for Industry and Review Staff Recommended Approaches to Integration of Genetic Toxicology Study Results.

Study of mutagen properties of test drugs is carried out according to OECD protocols on testing of chemicals:

This method is designed to detect the ability of pharmacological substances or their metabolites to induce gene mutations at indicator strains of Salmonella typhimurium. The mutational test is carried out in a microtiter plate format on the Ames MPF™ 98/100/1535/1537 set (Xenometrix, Switzerland). Salmonella typhimurium strains are used. The point mutations are introduced in S.typhimurium histidine operon (His) resulting in the violation of histidine synthesis and leading to inability of bacteria to growth on a medium lacking histidine. The induction as a result of mutagen influence of the reverse mutations on the type of base pair substitutions or reading frame shift in gene His of these test strains leads to reversion of prototrophy of bacteria on a histidine and ability to growth on non-histidine medium. Tester strains are exposed to various concentrations of test sample and grown on a medium containing no histidine. Mutagen potential is assessed by induction of revertant from an auxotrophy on a histidine and ability to grow on non-histidine medium. Strains of S.typhimurium named as TA100 and TA1535 allow to register the induction of mutations by the type of base pair substitutions, strains TA98 and TA1537 – mutations as reading frame shift. 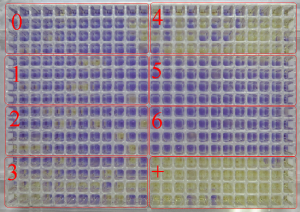